With a peak efficiency of 99%, no fan, and multiple power stages, these controllers have less power loss compared to other MPPT controllers. The TriStar MPPT features a smart tracking algorithm that maximizes the energy harvest from the PV by rapidly finding the solar array peak power point with extremely fast sweeping of the entire I-V curve.

Optional local and remote meters provide detailed operating data, alarms and faults with three LED’s to display system status. The TS-MPPT has a simple DIP Switch setup for plug and play operation or is fully programmable for custom and advanced programming with a PC connection. The chassis on the TriStar controllers is isolated from the power circuits, allowing use in both negative and positive grounded systems.

Extensive Networking and Communications Capabilities enables system monitoring, data logging, and remote adjustments. Both models offer open standard MODBUS protocol and Morningstar’s MS View software and allow a Serial RS-232 connection to a PC or laptop. In addition, the TS-MPPT-60 includes a built-in Ethernet port for a fully web-enabled interface to view data from a web browser to display up to 200 days of data logging and send email/text and messages. The TS-MPPT-60 also has a built-in RS-485 port for connecting to an EIA-485 network. The RSC-1 communications adapter converts an RS-232 serial connector to a standard RS-485 port and may be used to include the TS-MPPT-45 and TriStar (PWM) controllers and Morningstar’s Relay Driver in a EIA-485 Network. The TriStar MPPT can also be used as an EIA-485 network bridge for remote access to multiple devices through one Ethernet connection.

In addition to computer networking, Morningstar has developed the ability to set up a separate Meterbus network. The meter ports allow for communications between compatible products and Morningstar’s MeterHub (HUB-1) allows multiple Morningstar products to communicate over an expanded Meterbus network to provide improved data monitoring, additional capabilities and lower system cost. It enables multiple  controllers to share a single TriStar meter and display individual controller data as well as aggregated data for the entire system. The HUB-1 also enables multiple controllers to share a single Relay Driver (RD-1). 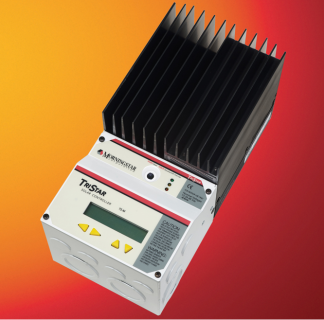